Why I love cats

I love cats. A lot. Oh words, you fail me. That doesn't even begin to cover it. I really love cats.

You probably know that I have a cat... the one, the only Elsie Penelope. 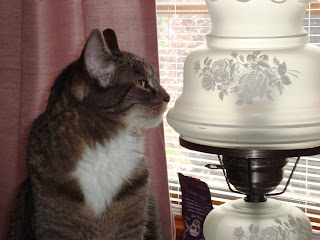 Ah, there she is. Isn't she gorgeous?

If you haven't read Temple Grandin's books Animals In Translation, you should. In it, Temple does a great job explaining how she uses autism to better understand animal behavior. One of the things she describes is that one way to study the brain is by its three layers. The outer-most layer, the neo-cortex, is the layer in which the connections form that allow us to have complex social emotions and will. It's our "human" brain. The middle layer, the cortex, allow us to feel basic emotions such as fear, want, anger, and love. It is our "animal" brain. The inner-most layer, the brain stem, allows us to perform involuntary actions such as breathing and digestion, is the "reptilian" brain. According to this evolutionary brain theory, people with autism resort to their animal brains, in which we feel the more basic emotions, much more often than do most people.

I found this very interesting because it gave at least some amount of background to something I know very well- that I understand animals better than I do people. It goes back to when Leigh said, "Okay, I'll go try to speak cat. Now you go try to speak people!" Just a few weeks ago, we were at my aunt's house. She has three cats, and one of them is terrified of people to the point that it's never, ever been touched (it's a shelter cat, a former stray). Given its history, this isn't surprising. However, this wouldn't be the first time, by far, that I'd gotten a stray to come over and say hello. There were 6 or 8 people in the house, and the cats and I were both feeling the chaos. I talked to the scaredy-cat while everyone else talked to the people, and it took no more than five minutes before she was winding around my legs. I bent down to pet her, and she gave me kisses. I can't explain the connection, but I can't deny it.

Is it because our brains are truly on the same wavelength, firing the same neurological firings and causing the same emotions at the same times? I don't know. No matter the amount of stress I'm feeling, it decreases by 90% at the presence of a dog or cat. I'm trying to explain how that works, but... I can't. Maybe that's part of what's so wonderful about it, that it just works :)