The living is room clean. There are new sheets on the beds. Tigger is anxiously sitting out on my desk where he can see out the window, sombrero in hand...

I'm hoping that by writing a post about her while she's in the midst of camp, staying with me, and moving in, that she'll forget about reading my blog and never catch this on. She might be embarrassed. So, this is a good time to tell you a little about Leigh.

We met doing color guard stuff in college for a Spring show, realizing that we both enjoyed guard, animals, and... okay, we talk about animals a lot. I'm not really sure what exactly we have in common, but we found a lot to talk about. But the time we went on a band trip this past October (24-hour bus ride to none other than Disney World!) we were close friends and decided to room together in Disney. She was aware that I had my share of issues by then, issues that things like anxiety and OCD didn't quite explain. I think it was early October that she first mentioned Asperger's.

A few weeks later, and completely seperately, my regular therapist also brought up ASD and wanted me to pursue a formal evaluation. When I had every reason that I couldn't get diagnosed, the first of which being that I didn't know where to begin and don't navigate that whole phone maze very well, Leigh would jump in and make phone calls for me when I got overwhelmed. The evaluator decided that I would have probably had PDD as a kid and HFA now, but decided to put Asperger's on the medical forms because my insurance cover's Asperger's but not HFA (That has since switched. So has my diagnosis). I was a little up and down through out all of that, but Leigh kept repeating the same refrains: it didn't change who I'd always been; it had always been there, this was the name for it; this was the right diagnosis for all those wrong ones they'd given me before... it doesn't change anything.

It seems a little odd to introduce Leigh as a friend. Yes, she's my friend... but, well... she still goes out with me when she knows that I'm liable to melt down if we do. Back at school, when I was having a hard day, we'd go to this local music store owned by 2 men (who referred to one another as their "partner"...) who owned 3 amazing cats. The guys were awesome, because they didn't make me talk or shop; they just let me play with their cats for as long as I wanted. Even if I was totally out of words that day, Leigh didn't mind going out with me. When I'm on the verge of a melt down, she always reminds me-- "sunglasses? ipod?" Sometimes, just being able to stand there and text, giving me something to focus on, is enough that I can stay in a situation. I'm learning to participate more in the world, having to retreat less and less. She has come to therapy appointments with me, met them, and told them what she thinks is going on. In fact, she'll be coming to a psychiatrist appointment and group therapy while she's here. So yes, Leigh is a friend, but has some therapist role in there, too, and maybe even a little bit of a parent? Granted, she's a psych major and wants to work with autistic adults, so would should I expect? She'll be good at it. The world is a little less terrifying when she's around.

... and the really important information? Leigh has a dog, a German Shepherd named Sarina, and a cat named Joe who lost half his tail about 5 years ago. Joey is wonderful. He's a bit like a kid with dirt on his face that you just have to love. He walks kind of by leading with one of his hips. Not the most graceful, but he's super soft and downy. Oh, Joe. I miss him. 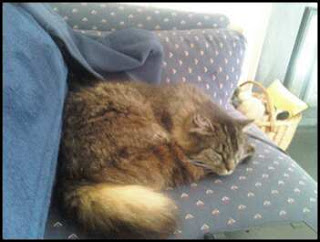