I'm having a rough day, so I hope you'll forgive me for providing you with a just-the-facts run down of my trip.

We spent 4 hours in the car with no listenable radio stations, so we talked a lot.
We got to Leigh's and were greeted by a very excited kitty and a very wound up dog. Here's me and Joe: 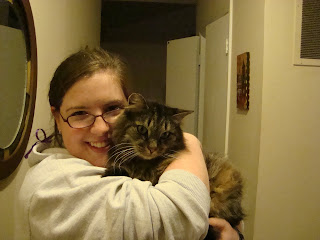 We stayed up way too late giggling and goofing around Friday night.
That meant that we were ridiculously tired Saturday morning, so we had to drag our butts out of bed for the walk. We did as such, and we we went to Baltimore. We walked roughly 3 miles (we think it was a little less) in the rain, but we had fun. Leigh got an Autism Speaks puzzle piece magnet for her car, and I got an Autism Awareness one for my mom's car. Here are 2 pictures from the walk: 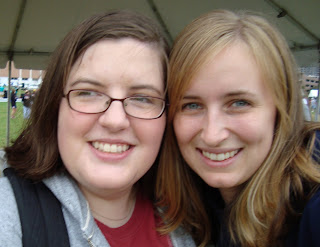 My version of eye contact :) Except not really, because Leigh was taking the picture, but that's still how it usually is 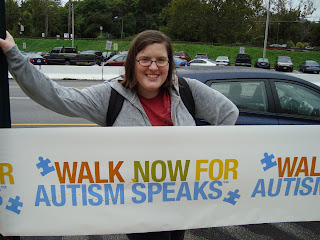 Then, after the walk, we went home and made a really good lunch of honey-mustard chicken and brown rice. It was delicious!

After lunch, we went to Leigh's family friend Susan's house. Susan has an orange-and-white cat named Marmalade. Marmalade is scared of men, so I told Susan how she can use positive reinforcement to get him used to men over time. I pet and played with Marmalade while Leigh and Susan talked.

Then, possibly the highlight of the trip for me, we went to Circle of Hope, which is a therapeutic riding center. I've been wanting to ride a horse for ages. I've only ridden once, when I was about 8. I didn't get to ride, but we got to watch 2 girls have their lessons, one of whom has autism. Leigh showed me around. I met a very, very old cat named Twix there who was sweet as could be. I also got to pet a ton of horses! They all put their noses through their stalls and wanted to be pet. Great big kitties! The horses are beautiful, and if/when my SSI money comes through, riding is one of the first things I want to do. I loved those horses!

After horses, we got Coldstone ice cream. I got pumpkin pie ice cream with white chocolate chips. Mmmm, ice cream!

From there, we went to visit Leigh's friend Tam about 45 minutes away at his college. His roommate is from Japan and is an awesome classical guitar player. Tam is super technologically gifted. For example, he's created a "party" button on his computer; it's a touch screen, and if you touch this button, all the lights in the room turn off, crazy lights go on the ceiling, and music starts playing with some crazy bass. Tam is a real character!

From Tam's, we rode back home and got Chinese. Mmmm...

We crashed early Saturday night. We were exhausted!

I guess I should maybe leave out this part, but the next thing that happened is that Leigh got sick. But it's okay, because she felt better when she got up in the morning. I said that I'm reporting the facts here, and those are the facts.

We got up Sunday and went to church.

Then I took a nap with Joey, who cuddled with me. My kitty doesn't cuddle like that. Ohhhh, Joe. There's just no kitty like him!

Finally, we hung out with Leigh's two friends Josh and Reino. Josh made Leigh and I free drinks(!) at Starbucks, then we went and got lunch at Chipotle. Mmmm, guacamole!

Finally, we headed home. And I slept well, I might add.