I was really nervous going into today. Today was the appointment with the psychiatrist for the evaluation to determine whether I am "mentally fit to work," and if so, in what capacity. I didn't have any idea what I was getting into, what he would ask me, whether I would tell him that I have autism or not, whether he would pick up on it in a 2-hour long session. How was I going to survive the 2-hour session? That was the other issue. I put my pumpkin in my purse, wore a new cotton sweatsuit kind of outfit that my mom got me that actually goes together so I'd look put together (says mom), and kept a squishy toy in my hand the entire time.
It turned out to be a straightforward Mental Status Exam, which Leigh had to practice doing and practiced on me last year. I knew what was coming. It was even the exact same questions (i.e., the same numbers in the math problems, the same words to spell, the same proverbs to explain... which I still didn't know!). Once I realized that it was the same thing, I felt so much better. I could do that. I told him that I felt like I was cheating! He said that it's okay, because a lot of people get more than one MSE.
After 90 minutes of question after question, his conclusion was that I have autism and anxiety (but no depression). He thinks that I can work in some capacity, perhaps 16 or at most 20 hours a week, but no more, without shutting down. He's going to report that to the SSI people. I should hear within 30-60 days. He says that if I am denied, I should appeal, because I am really, really eligible for SSI, moreso than a lot of other people he says are eligible. So, time will tell what happens. Please send up a prayer about it!

After the appointment is when my happy day started. I looooove fall/harvest things, and it was time for Mom and I to go pick a pumpkin! First, we had to stop and get some pumpkin ice cream to prepare (mmm, ice cream!). Then, we went to the farm. They have a whole section dedicated to allergen-free foods, so we stocked up on some GF breads, animal cookies, cake mixes, and stuffing bits for Thanksgiving. I heard crazy noises coming from somewhere, and I followed them to find... a pig! And a cow, and a donky, and some goats and a bunny and sheep! I had never met a cow, and this little calf was adorable. See for yourself! 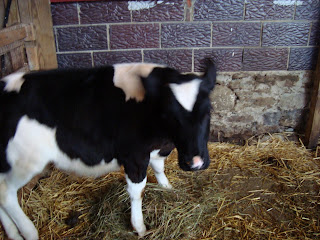 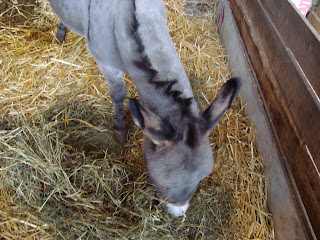 Then, finally, we found a nice, big pumpkin. I'll be at a bowling/out-to-dinner party with the autism group on Halloween, so we aren't going to carve it. I love it, in all its orange, pumpkiny glory. Here's mom and the pumpkin! 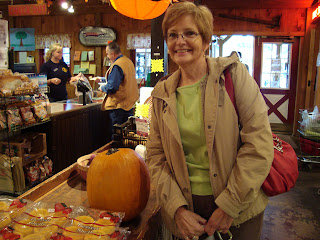