The importance of a pumpkin 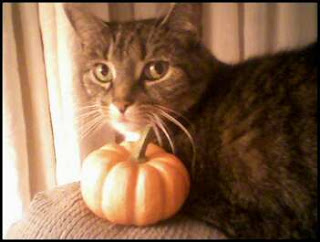 With autism, some behaviors fall under the criteria of the DSM-IV. For example, if you're ond of the people reading this who knows me in real life, you probably know that I don't make eye contact. That's in the DSM ("marked impairments in the use of multiple nonverbal behaviors such as eye-to-eye gaze, facial expression, body posture, and gestures to regulate social interaction"). You know that I absolutely love cats. That, too, is covered in the DSM ("encompassing preoccupation with one or more stereotyped and restricted patterns of interest that is abnormal either in intensity or focus"). Or, you might recall the times that I've left the room during a social gathering or hidden in the bathroom. The DSM calls that "lack of social or emotional reciprocity, including preferring solitary activities."

But there's a whole slew of other behaviors that the DSM doesn't list. That doesn't mean that these aren't just as common in autism, pretty much across the board. One of those things is the sensory issues. My hating loud noises, not being able to tolerate raw fruits and veggies, and hiding from fluorescent lights are all sensory hypersensitivities. Another common issue in people with autism is processing problems. For me, the main issue is auditory. It takes me longer to process what I hear, especially in background noise. In fact, if there is a significant amount of background noise, I'll go so far as to say that I can't hear you... it's not a volume thing, though. Also, I can't follow conversations with more than one other people. I get lost really quickly. I'm not ignoring you, I just have no idea what's going on, so it gets hard to keep acting like I'm paying attention.

The thing that's popping up lately... I'm guessing that it falls into this second category of behaviors: ones that aren't listed in the DSM, but are fairly common in people with autism. I get attached to things. It started like it does with most kids; I had a blanket that I carried everywhere. Embarrassing moment, though. I carried it almost everywhere with me until Kindergarten. It went in my backpack to go to pre-school. I got really anxious without it, but if I knew it was tucked in there, I was fine. Over the years, the list included a series of plastic animals (I remember an elephant, a zebra, and a turtle), a block, a racquetball, a squishy ball, a sand-filled lizard... you get the idea. It's always something little, and it never makes a whole lot of sense. I just get attached, and that's that. For maybe a month, it goes everywhere with me, until it passes.

Fall is my favorite time of year. I was at the grocery store the other night getting Diet Coke (yes, I am addicted), and I saw the cutest little pumpkins, 2 for $1.49. I decided to get 2, not knowing what I would do with the second. I wanted to put one up in my room to decorate. It would be nice and festive. Well, one is on my bedside table. I took the other one to show my mom. Then I brought it by my computer with me. I brought it up to bed. And down the next morning. And back up for my shower. And... this is my pumpkin now.

This was all well and good until I had to go to work today. The pumpkin went upstairs when I got a shower, and back down so I could get my shoes on, and... uh oh. I had to leave. But, pumpkin! I was frantic. I was anxious. I needed my pumpkin. Now what? I strongly considered throwing it in my purse, but decided that it was ridiculous. For the record, this pumpkin is in no way personified. It is a pumpkin. I get that. But I need it! I went to work without it, and upon walking into the store, I regretted it. I was anxious the whole time at work. I had to pull out the cats (the pictures on a keyring) and look at those for a while, which made me stim, as cats will do.

I wish I could explain my need of my pumpkin. It's grounding. It soothes my anxiety. It's familiar. It fits perfectly in my hand. Holding my pumpkin is a little bit like a hug (a tight one, not a painful one!). It brings me back.

Tomorrow, the pumpkin goes in the purse. It's coming to work.
Posted by Lydia at 9:43 PM