Kitty and the phone

I really, really don't like to talk on the phone. I have a really hard time understanding the other person, and I say, "what?" so many times, it can be embarrassing. I get frustrated. I also can't seem to figure out that the person on the phone doesn't know what's going on where I am, and I confuse whoever I'm talking to. I just really, really don't like to talk on the phone. If I'm even a little stressed out, it's even worse. If I'm stressed, I usually end up melting down over having to talk on the phone. It gets interesting when I need to talk because I'm upset, but the only way to do it is to talk to a friend on the phone, which is what happened last night.
My kitty has been sick. You know how much I love and need my kitty, right? I need cats like you need people in your life. They're that important. Well, she's been throwing up daily and peeing a lot. We took her to the vet to get her teeth cleaned because her gums were infected, and he was extremely concerned that her kidneys were failing. She's close to 12 years old, after all. Kidney failure is fatal. My kitty. Fatal. Now, I realize that I'm going to lose my kitty at some point, and being that she is nearly 12, I know that it's going to be sooner rather than later, unfortunately. The problem is that because my health insurance is so expensive, my mom says that we couldn't afford to have a new cat. We would need that bit of extra money that we currently spend to feed the cat. I'm still waiting to get on state health insurance, still waiting on SSI. It's taking forever. Last night, I just about lost it.
I texted my friend Emily, hoping that she'd be able to go online so that I could explain the kitty situation and ask her to pray about it. She couldn't go online and called instead. I was upset and would have exploded if I tried to talk on the phone much, so after some whining and "I don't know, Em" and "I don't want to talk" and some more "I don't know!" I got off the phone. I texted her and explained. She prayed.
God answered her prayer with Magic Words: it will pass. The hopeless feeling, the guilty feeling of taking my parents' money, the panic over my cat... it will pass. And right then, it did start to pass.
I got the phone call from the doctor at 9:30 this morning. The verdict? She has an auto-immune issue that's causing her muscles to break down and upset her stomach. She needs different food and pro-biotics, and she'll be okay. Her kidneys are a-okay. Fore the foreseeable future, all is well. Praise God.
Here's my beautiful kitty, right after she got home yesterday, still partially under anesthesia. Her head was bobbing all around, so I had to hold it still. She was pathetic yet oh-so-adorable.
Elsie and Lydia, together again. 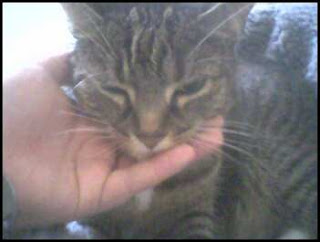