A bunny who is funny

Sometimes I hear the myth that people with autism don't get humor. Let me set one thing straight: I most certainly, definitely get humor. Actually, I think I can be pretty funny, and I know some other people who would agree with that. Now this is not to say that I find things funny that is typical for people my age... but I do have a sense of humor.

When asked by Mom what I wanted in my Easter basket, I requested a small bunny or duck stuffed creature. I have been eyeing the ones at the grocery store every week for quite a while, and she knew this.

Well. For whatever reason, she waited until yesterday to choose my creature. Why? I don't know. She's quite a busy Mom, for one thing. Also, I don't think she's been to my grocery store where I oogle at the stuffed guys in many weeks, now that Laura takes me. Whatever the reason, by the time she got there, things well pretty well picked over.

She settled on this little guy, being practically the only one there: 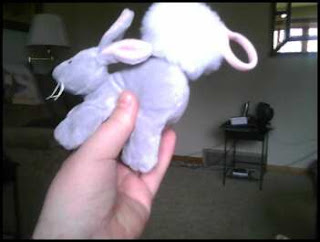 First I thought he was kind of ugly. Then I didn't know what to think. But now that I've been lugging him around with me for a day or so... well, I think he's hysterical. Hilarious. I mean, whose idea was that? "Let's make a bunny, a cute little bunny, with a ridiculously large tail."

So, he is Funny Bunny. And I giggle every time I look at him.

But hey, that tail? It's a good handle!

Not to mention, if I poke him at Elsie, she tries to eat his face... which is also rather funny to watch.