Elsie was being perfectly normal, doing her Elsie thing, and then we noticed that she never ate breakfast Thursday morning. Or dinner. Or anything all day Friday. My mom said that as long as she was drinking, she would be okay. I checked her litter box, and it was almost completely empty. She hadn't been drinking.

So I called the vet. They called back to say that they wouldn't be in till Monday morning, but that we needed to take her to the emergency room. She could have cancer, it could be an intestinal obstruction, it could be kidney failure... we needed to go.

We called the emergency vet and found out that he wouldn't be in until 7 P.M., so we had some waiting to do. My mom even tried to give Elsie chicken and chicken broth, and she wouldn't take it. Bob wanted us to wait, but my mom, and especially me, didn't want to wait until it was too late. So, we packed Elsie up in her cat carrier and put her in the car.

The vet weighed her (she's down to 6 1/2 pounds, from 10) and took her temperature, which was normal. Then we waited while the vet took care of other big emergencies (somebody ate carpet, and somebody wasn't breathing). Elsie was anxious but okay. She laid down in her carrier and flicked her tail back and forth. We got her back into the room after about an hour, and the vet said that he wanted to do blood and urine tests to check her liver and kindeys and for diabetes. He wasn't sure that they'd show anything, but in case it was something they'd show, it was good to do the tests. Mom agreed.

So, they took Elsie back and my mom and I went to Bob Evans to get some dinner. I worried like crazy the whole time. What was wrong with her? Was she okay? I knew how scared she must be back there getting poked and prodded without anyone recognizable. My mom said that she hates when animals get sick, because you can't explain anything to do them. It was really hard.

Mom and I got back to the hospital and waited just a few minutes. The doctor called us back to tell us that the (expensive) tests showed nothing. Everything in her blood and urine looks "really good," and considering she's 13! He said we could do an x-ray, but he doesn't thinks he needs it. We decided not to do the x-ray. He said that he thought the best thing to do was to give her fluids and Pepcid to calm her stomach, so we said to go ahead and do that.

They brought Elsie back 15 minutes later with a huge bulge on the back of her neck. That's where they put the fluids. Her front was all wet from when they cleaned it to get blood. She looked terrible. But, I had my kitty back, and I don't know that I've ever been happier to see her. Having been awake for several hours straight now, she looked tired.

We brought her home and I tried giving her a little food, and she ate it! Then, she ate breakfast again today. I'm so happy!
I don't know what I would do without Elsie. I guess I'll find out someday, but I'm glad that day wasn't yesterday. I like to think she has some years left in her. At 13, her eyes are bright and clear, her coat is beautiful, and her medical tests look perfect. I hope she lives to be 20.

Here's a picture of Elsie back in her spot. She sits to one side of my desk while I type, and I pet her every few sentences. Her other spot while I'm here is sitting on the floor, staring at me. Silly kitty. 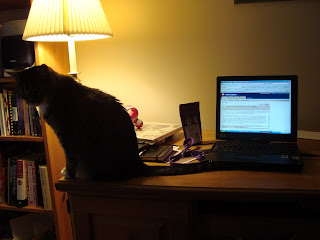