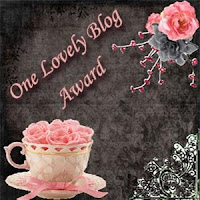 It took me a while to get this up here (it often takes me a while to get anything done... I get distracted rather easily), but one of my readers gave me this blog award. I thought it was pretty and that I would put it up, even if I don't read enough other people's blogs to know who to pass it onto. I guess I'm kind of messing up the game, but that's okay. I never did play games the right way. Why should I change now?

I've come to really, really like blogging. It gives me a chance to put things in writing before I have to talk about them, which makes them easier to talk about. It gives me a way to say, "well, did you read my blog post?" instead of having to tell the same story or explain the same thing to multiple people, since I wear out really quickly from telling and explaining. It allows people to know what's going on in my life. It's an outlet for when I need to write but don't have a place or purpose for writing. And, I hope, it has allowed you to learn a little bit of what it's like to live with autism. That's my goal. That's why I started this thing.
So thank you, Annicles, for the award, and thank you everyone, for being along for the ride with me. Now get those seatbelts back on! We're not finished yet!
Posted by Lydia at 12:04 PM