I found out today that my last day at partial will be Friday, July 10th. That will make 3 weeks total. It seems that most people are there closer to 6 weeks, but I think I'll be totally ready to be out of there after 3. 99% of the group therapy revolves around terrible family lives, difficult kids, and trouble with spouses. I can't even begin to relate. I'm still needing breaks every hour-ish. All the talking just turns into noise and starts to drive me insane.

The director realizes all of this, that the program is far better than nothing but not exactly right. So, she is going to get me in a group specifically for autism. It's brand new, and it starts the third week in July. It will be more like once or twice a week for an hour or two, rather than everyday.

I had a job interview at Giant Eagle (grocery store) on Saturday that I think went well. They need someone part time in the photo lab and in the childcare area... exactly what I wanted to do! Even at part time (16 hours per week), after one year, full health benefits! Yay!

I have always thought that autism was completely inseparable from frustration. I have told my best friend, many times, that I HATE autism. But really, what I meant, was that I hated how I felt: frustrated. I definitely do not think that medications are the answer to every problem, but I also think that it is ridiculous to expect someone to reason normally without the correct balance of biochemicals in his brain. I am so grateful for this new medication (Geodon). I'm on the smallest possible dose (20mg), and it has made a world of difference. I have had two outbursts in the past 8 days, rather than several each day, constantly trying to stave them off. I never thought that I could have autism minus all of that frustration. To be honest, I don't know that I mind the autism so much anymore. I certainly don't hate it. It is probably still the root of the frustration, because the problem that often sets it off is not being able to get things out so that someone understands me, but if the frustration is lessened, the other aspects of it aren't nearly so bad.

My best friend is coming back from her month-long mission trip to Mexico on Friday, and I'll be honest... I'm excited! I know that she is needed there, but I like her too much for her to go away for a long time. She lives 4ish hours away, but at least when we're in the same country, we can text and talk on the phone. Granted, I hate to talk on the phone, so it's mostly texting. Anyway, all of the recent craziness has been a little tough without her around. Last year, she flew home from the same mission trip on the 4th of July and got to watch fireworks from above... I think that's really neat! 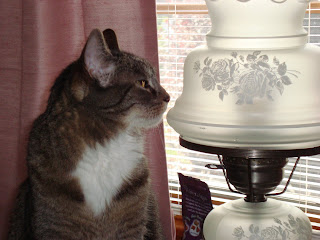 After a lot of furniture changing and then rearranging and organizing, Elsie had to check out my "new room." She definitely approves... the kitty paw prints all over the glass top of my end table and desk prove it!
So, I'm just wondering, here... if you read this, leave a comment? I'm wondering if I'm writing to myself, or if anyone is reading. Either way, I'll still be writing, I'm sure.
Posted by Lydia at 7:32 PM